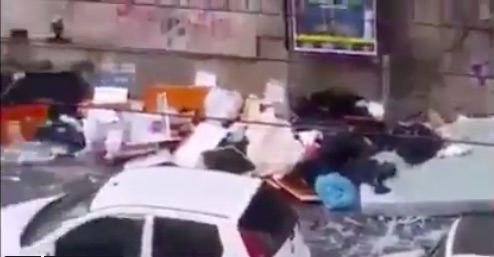 On the Jewish Control of Europe

For the benefit of our American readers, allow me to clarify and explain a few simple issues that will enable outsiders to see this whole British and European situation in context.

Britain, like the United States, is completely under Jewish control and can be regarded as America’s 51st state. There are American troops and military installations in Britain right now that the native Brits, even if they were so minded, would be unable to evict. Telling the Americans to “get out” would be unthinkable. They are now permanent guests here whose presence we must endure with patience and forbearance, pretending it’s for our good. The same situation applies even more forcibly in Germany, another Judeo-American colony in all but name.

In Britain, the Conservative party is the equivalent of America’s Republican party and represents the interests of the wealthy upper classes, while doing its best to give the impression that it entertains a robust affection for the the working man. The Labour party (or the Socialists) supposedly represent the interests of the proletariat and is the equivalent of America’s Democratic party. As in America, both parties are firmly under Jewish control, just as the mass media, the judiciary, the armed forces and academia also are. The Bank of England is equivalent to America’s Federal Reserve and makes no decision without first consulting its American oracles, i.e., the elite Jews who perch at the top of the financial pyramid where Lord Rothschild and his mighty minions sit enthroned in theocratic splendor.

Finally, the European Union—scheduled soon to become the “United States of Europe”—is also, as you might have guessed, completely under Jewish control. There is not a single powerful institution throughout the length and breadth of Europe that does not have some scheming Jew in the background, whispering his “advice” or jerking the puppet strings of his compliant marionettes.

Video: Forced Diversity Is Not Our Strength

Italy is being destroyed as well

This isn’t the Middle East or Africa – this is Naples in Italy. This is how mass immigration is destroying Europe.pic.twitter.com/93aY2PrRlQ