John Hagee is one of the most evil people on the planet. He mocks Jesus by his Satan worship -has betrayed USA – wants to start World War THREE – wants to have millions of innocent people murdered for the greater glory of the jews and IsraHELL – and all of these horrors under the big lie that he thinks he is some sort of a Christian pastor. In truth – he is a Satan worshiping fraud

He is as close to the true description of the jew ( his mother is a jewess) anti Christ as I have witnessed in my lifetime. He is the very essence of wickedness and evil. His mockeries of Christ
could be right out of the Talmud. He oozes evil hate and bigotry like a leaking public toilet.

Just one of his sacrilegious blasphemies include the teaching to his ‘flock’ ( who are indeed the most criminally ignorant of sheep) that our Lord Christ was NOT the Messiah – but war criminal Netanyahu. Source

Moral Rot In The Christian Church

Christian Zionism “The Beast and the False Prophet”

Christian Zionism: The Antichrists’ Rewrite of History- The Scofield Bible is a LIE!

Hagee had the audacity to use President John F. Kennedy’s Berlin speech to compare it with his rantings for placing IsraHELL before our OWN USA! Talk about a low life underhanded ploy – considering the fact that Kennedy was murdered by Hagees jew friends for trying to keep America’s wealth out of jew hands ( the jew run Fed which had brought our nation economically to its knees)

JFK tried to save USA for Americans. Hagee is trying to betray America to IsraHELL as a jew ‘colony’. Get it?

Hagee has compared mass murderer terrorist war criminal Netanyahu to our Lord by calling him the Messiah.

Here are just a couple of the quotes made by that murderous reptile: “Once we squeeze all we can out of the United States, it can dry up and blow away.” — Israeli Prime Minister Benjamin Netanyahu, 2002.

Or for you imbecile treasonous jews first BaptDUH morons – here is what he thinks of you:

“My opinion of Christian Zionists? They’re scum. But don’t tell them that. We need all the useful idiots we can get right now.” — Benyamin Netanyahu, at the time a former IsraHELL prime minister

John Hagee also says, “Most readers will be shocked by the clear record of history linking Adolf Hitler and the Roman Catholic Church in a conspiracy to exterminate the Jews. Honest folks – I just can’t make these insane outrageous loony tunes lies up.

Keep this frightening fact in mind. More than FIFTY MILLION of Hagee’s ‘BaptDUH puppet drones here, share that kind of sick twisted reprobate irrational bigoted intolerant perverse imbecility. Are YOU next in their racist hate sights? If you are a Catholic – you already are.

It is said that there some deeds so putrid and so vile that even a sewer rat would not do -but scum like John Hagee doesn’t have ANY reservations for wickedness – no matter how depraved reprehensible or diabolical. Just listen one of his MEGA- lying racist hate screeds and you will understand why his goals in life are to to (A) – take Americas to the trash heap and (B) to get even richer and more obese doing that evil.

Gee John – as arguably evil as you are – with that kind of sick ego – I wonder what God has in store for a non repentant Christ mocking lying blaspheming adulterous slandering glutinous devil-worshiping libelous racist hate-mongering war-mongering greedy soul-destroying violence-loving child-murdering treasonous vicious depraved demonic sadistic soulless fiend like yourself?

Your demise will be mourned by your father in Hell and celebrated by the angels in Heaven. Source

The Jews Starts ALL Major Wars

War is just another Jew racket and Jew scam. 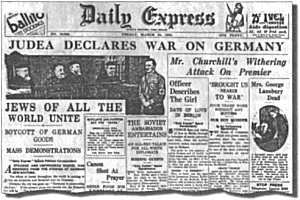 Do You Remember The Jewish Declaration Of War On Germany While Stalin & Bolshevik Jews Mass Murdered Millions?

Let’s also not forget that the Jews started the Civil War here in the U.S. and also The American Revolution so that Jews could dismantle and disentegrate this country as much as possible to install Jew control mechanisms: Illegal Fed Reserve, Illegal Income Tax (all instruments of Jew Communist Totalitarianism)= jews own the U.S.

And so it goes, the jews continue to foment and start wars constantly (WWI, WWII, Korea, Vietnam, Iraq, Afghanistan et al) – insinuating the U.S. military into each and everyone of these death trap scenarios. Here’s how the unethical jew war scam operates: Jews foment the wars they instigate, jews arm and fund ALL sides ALL countries, then jews bankrupt each country financially – then jews come riding in with the “jew solution”: Buy up every asset in the country and thereby own that country. See how that works…. Brilliant strategy used by jews? Not quite. Jews are just following a template for their ultimate wet dream to be completed: Jew New World Order where jews rule the entire planet under the auspices and aegis of Jew Satanic Communism.

Additionally, here other evil-vile objectives for jew wars: Since jews are a huge criminal network that also happens to be a Satanic Death Cult, they use the deaths from these wars as “Satan’s sacrifical alter”. The wars currently occurring in the M.E. are all fomented by jews for all the above stated reasons – also these wars kill off lots of White Christians (we White Christians are a bane to the existence of jews). Jews have White Christians and Muslims duking it out in the M.E. right now – so that both sides kill each other off….it saves jews the trouble.

And while it’s true that I firmly believe in a strong military for the U.S., I also believe that continuing to fight jew wars is an exercise in participating in our own downfall and our own demise.

Here’s hoping White Americans wake the hell up and stop fighting in jew wars and exercise our strong military as a ways and means to deal with the jew problem – not aid and abet in the jew problem – and keep perpetuating the jew problem. Otherwise, it’s going to ultimately be the “End Game” for here in the U.S.

None of the foregoing is secret information. Jews openly brag about how they start all wars and get fat financially from these wars….it’s all explicated fully in jew encyclopedias. Actually jew encyclopedias should be seized and used as incriminating evidence against them…..you know, for “when the time comes”.

And, it’s coming. It’s just a matter of time.

I really get sick every time I hear preachers such as John Hagee and Jerry Falwell demonize the Arab people, while glorifying the Jews. This is wrong. The Word of God teaches no such heresy. Deuteronomy 9:6 states, “Understand therefore, that the LORD thy God giveth thee not this good land to possess it for thy righteousness; for thou art a stiffnecked people.” The Jews today are as stiffnecked with pride as they were 4,000 years ago.

The present nation of Israel was secured through tyranny, driving out the Arabs at gun-point, and not by the hand of God. Ezekiel 37:21-23 tell us that the Lord will regather Israel when He returns to reign as King after the Tribulation Period. Just as Abraham and Sara decided to take matters into their own hands (i.e., Hagar and Ishmael) instead of waiting for God’s promise–so have elite Jews today decided to control their own affairs without God.

Sadly, most Jews are hellbound without Christ, following demonic Judaism and the Kaballah instead of the Word of God.  No unsaved Jew will ever see the Promised Land (2nd Thessalonians 1:8 applies to Jews too). God is NO respecter of persons (Acts 10:34). Zionism is a false doctrine. What is Zionism? Basically, it is the teaching that Israel should be treated more special than everyone else. Romans 2:11 clearly states that God is NO respecter of persons, and neither should we be. John Hagee is a stooge for wealthy Jews, who keep him rich.

Please don’t misunderstand me, I love Jewish people, but I love Arab people EQUALLY. I’m tired of preachers stereotyping all Arabs based on the hatred of a few radical Islamists. As Christians, we all know the pains we endured during the Jim Bakker days. We are just as wrong to demonize all Arabs, as unbelievers are to demonize all Christians. The truth is that MOST Arabs and Jews are unsaved, and BOTH nations are in desperate need of Jesus Christ.

Many Arabs Have More Morality than Americans and Jews

I was listening to John Hagee preaching the other night, WORLD WAR III HAS BEGUN, with Jerry Falwell by his side. Hagee was saying all sorts of horrible things about the Arabs, and how murderous they are. Then he talked about how great America is, and our friends the Jews. Interestingly, Hagee didn’t mention the 50,000,000 abortions in America.

Do some research and you’ll find that Americans have murdered 25 times more people through abortion than all the Arab wars combined. In the 8 year Iran-Iraq war (1980-1988) alone, the death toll reached 1,000,000 lives. In those same years, Americans MURDERED over 12,000,000 babies!!! Who’s the savages Mr. Hagee? Who’s the monsters? Who’s crazy and filled with hatred? Please don’t misunderstand me, I love America, but I detest and loath the sins of our nation. I’m tired of Zionists trying to paint a picture of Arab people as the scum of the earth.

Biblically, we are ALL hell-deserving sinners, prone to disobedience and wrath (Ephesians 2:2,3). It is wrong for Christians to continually attack the Arab people because of their false religion, while overlooking the false religion of the Jews. The Jews are as messed up as the Muslim Arabs. Remember, the Arabs are the seed of Abraham too. We should not be biased towards one group over the other. We are to love all people. To label the Arabs as suicidal maniacs is to indict ourselves as murderous maniacs (and we Americans have certainly taught the world how to kill).  Read More

MUST WATCH! “Synagogue of Satan” (Full) by Andrew Carrington Hitchcock 1936-2006